As a scientist and artist I investigate the complex relationship between the genetic potential of an individual and the biological, social and environmental forces that act upon this inherited component over time. I have used the vehicle of self-portraiture to develop a visual metaphor for the relationship between genotype and phenotype; simply stated, nature versus nurture. I considered all possible images of myself to use as a foundation for the project and I quickly settled on my Sam’s warehouse identity card photograph. I wanted something that did not play to my vanity, something more like a mug shot and an image that was quintessentially American. What could be more American than an access card to consumerism on a large-scale? My Sam’s warehouse identity card photograph represents the genotype. This image corresponds to the human genome, the progenitor, which is a description of the genetic potential of an individual. Likewise, the identity card photo defines the potential, and sets some limits for the images that will result from it.

The phenotype, the entity that we can observe and describe, which arises from the genotype, is represented by a set of self-portrait images that are all derived from this single image, the Sam’s club photograph. In order to generate a large variety of images that would correspond to the diverse phenotypes encountered in nature, I scanned the Sam’s club photographic image from the card into the computer at six different resolutions and prepared six aluminum photolithography printing plates. Initially I hand-printed one image upon another giving rise to lithographs that varied according to color and which resolution image dominated. Additional variation developed with the inclusion of collage elements, use of metallic inks, and by drawing and painting on the printed plates. Making video frames of some of the completed prints and processing them through a computer animation program gave rise to a new generation of digital print images. A dramatic change in the imagery came as the result of weaving of two prints together to form a single image. A natural evolution of the art-making process, I believe that these images are most representative of the layers of complexity that define all humans. In some cases the phenotype images are very different from each other while in others the images are closely related. They represent the spectrum of phenotypes one would encounter in many laboratory experiments and in natural experiments of matings of the human species. The images suggest different ages, different ethnic groups, and a range of emotions, yet they are all derived from the single Sam’s club photo with its finite amount of digital information. 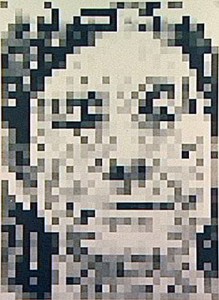 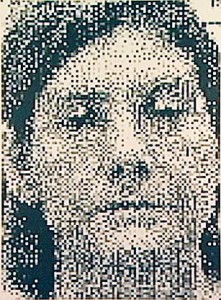 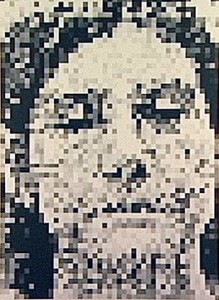