Encounters with the Elements: Petit Suisse

The countryside of Luxembourg seems rather bland and orderly as one drives along.  However, there is a surprise.  The pastures suddenly give way to steep ravines in a region called “Petite Suisse.”  From the sunny fields near the village of Beaufort, one descends abruptly, precipitously, through the deep shade of unchecked foliage into quite another world.  In the cool relative darkness startling rock formations blazing with color appear.  These massive outcroppings are further embellished by the growth of lichen adding another palette of color and texture for our eyes.  One can’t help but speculate on the past.  How were these rocks formed?  They appear to be fossilized versions of a once liquid earth, oozing gases and full of movement.  The stark beauty of these now rigid and seemingly immutable alluvial masses reminds us, inescapably, of the fragility and transience of our own existence.

When framing these images in the camera, I deliberately avoided recognizable features such as ferns or trees that would provide a reference and set the scale. Preferring ambiguity and its unsettling effect, I encourage the viewer to enjoy the painterly forms and what the imagination suggests rather than a reflection of what I thought I saw that day. 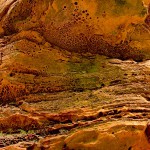 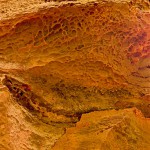 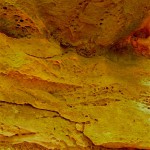 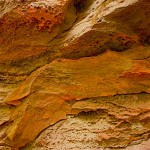 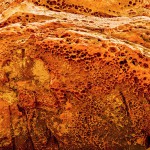